In 1951, New Zealand temporarily became a police state. Civil liberties were curtailed, freedom of speech denied, and the Government used force against its own citizens. This film tells the story of the infamous lockout of waterside workers and the nationwide strike which followed.

New Zealand unions including the Maritime Union delivered a letter to officials of the Mexican Embassy expressing concern at the use of force against Mexican workers.

He says that the Maritime Union of New Zealand works closely with the MUA and other unions in international alliances such as the Trans Tasman Oil and Gas Alliance.

Mr Fleetwood says the Australian workers had the full support of maritime workers around the world.

He says there have been ongoing feedback from workers that paints a picture of a decline in standards in many ports.

Mr Fleetwood says that the recession and increasing competition for available cargo in New Zealand ports means many employers are cutting corners. 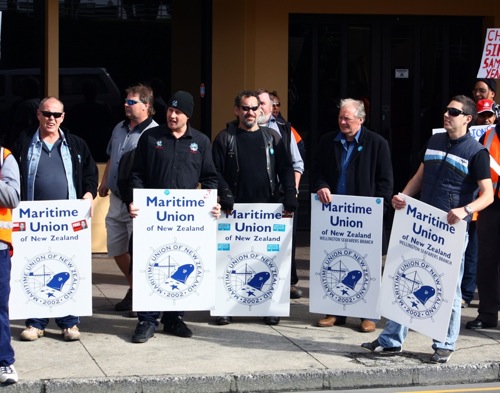 The Maritime Union has upped its industrial and financial support of Telecom lines engineers in their employment dispute.

Maritime Union General Secretary Trevor Hanson says a national meeting of Union representatives from ports and ships this morning voted an initial $10,000 to support Telecom lines engineers in their struggle for secure jobs.

Maritime Union members from New Zealand ships and the waterfront joined rallies in Auckland and Wellington this morning alongside the lines engineers and other supporters.

The Maritime Union has added its weight to the struggle of Telecom lines engineers fighting to protect their jobs.

Maritime Union of New Zealand General Secretary Trevor Hanson says maritime workers will be supporting the Telecom lines engineers, who are members of the EPMU, in their battle against contracting out.

He says a special national executive meeting of the Maritime Union has been called for Monday, which will be followed by communications with the International Transport Workers Federation based in London and its New Zealand union affiliates, as well as Australian maritime unions.

Port of Otago “near crisis”

Workers at the Ports of Auckland have issued a strike notice in order to hold a stop work meeting between 12 noon and 4.30pm on Friday 5 June 2009 to discuss employment issues.

The Maritime Union of New Zealand announced the stoppage after mediation with port company management about new work conditions for union members to avoid redundancies took place on Thursday 21 May.

Maritime Union of New Zealand Local 13 President Denis Carlisle says the stopwork meeting will bring together workers at the Port to discuss ongoing negotiations around their expired collective employment agreement, which had been impacted by a management plan to slash jobs.